Dear Johnny,
…on behalf of Johnny Depp Network, I would like to wish you a happy 56th birthday. All the best of everything to you! May you spend this special day with all your beloved ones.

It’s crazy how many messages I receive (not only today!) of people asking me to tell you how much they love, admire, adore, thank you. I really, really wish you could read them. It breaks my heart when I have to tell those people that I don’t have the chance to forward their lovely messages to you. I’m so overwhelmed by the love and gratitude people are able to spread and send out to someone that doesn’t know them at all but has managed to move them, touch their souls and often even change their lives to the better! That someone is YOU.

So, with all the love and words in mind that reach me on a daily basis by admirers of yours and together with the love and appreciation I personally feel for you, I would like to THANK YOU for bringing joy to our lives for years. With you acting, your music, your personality, for being you, for being there. Thanks! Thanks! Thanks! The happiest of birthdays, Johnny!

First off all, for those who do not know the movie, Face/Off was released in 1997 and stars John Travolta and Nicolas Cage. In order to foil an extortion plot, an FBI agent undergoes a facial transplant surgery and assumes the identity and physical appearance of a terrorist, but the plan turns from bad to worse when the same terrorist impersonates the FBI agent.

Before Paramount had a hit on its hands, Marco Brambilla (Demolition Man) was attached to direct and Johnny Depp was eyed to star. Brambilla, according to Shortlist’s oral history, wanted a younger cast, and Paramount was trying to turn Depp into a movie star. Eventually, Johnny dropped out because he — rather inexplicably — thought Face/Off was a movie about hockey.

END_OF_DOCUMENT_TOKEN_TO_BE_REPLACED

Today is a special day not only for Johnny himself, but for all Johnny admirers as well. He turns 54!

We, on JDorg wish you, Johnny, a happy happy birthday. May you have a great day and spend it with your beloved ones. We wish you only the best of everything.

We’ll never stop supporting and backing you. For more wonderful years to come! We love you!

Johnny Depp’s five condo units—four two-bedrooms and one one-bedroom—are perched atop the Eastern Columbia Building, a circa 1930 art deco structure known for its four-sided clock tower, said Mr. Dees, who is listing the property with colleague Nick Segal.

According to public records, Johnny Depp bought the condos from the developer for about $7.2 million in a series of transactions between 2007 and 2008. He then left the layout of each apartment as it was. He added doorways connecting three of the units, which he used as his living and entertaining space, while the other two served as an art studio and a guest suite.

The units, which total about 11,500 square feet, can be purchased together or separately.

More info and pics at WSJ. 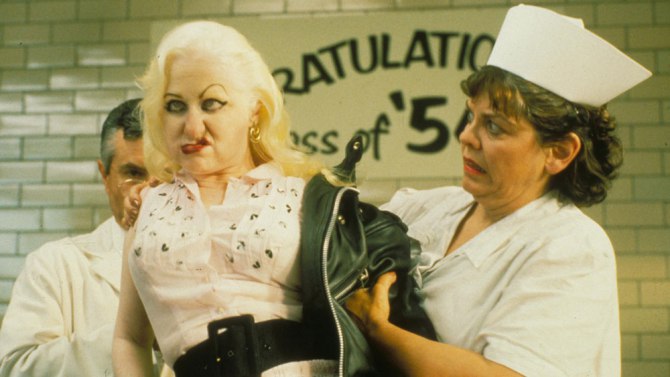 Kim McGuire, who played Mona “Hatchet-Face” Malnorowski in the John Waters film “Cry-Baby,” died Wednesday afternoon at a Florida hospital. She was 60.

McGuire was hospitalized on Tuesday with pneumonia, but did not respond to treatment and went into cardiac arrest, her husband Gene Piotrowsky told TMZ.

A GoFundMe page was set up a by a friend on Wednesday night to aid Piotrowsky.

Johnny Depp and his camp have only released the one official statement that has now been read by half the globe:

Given the brevity of this marriage and the most recent and tragic loss of his mother, Johnny will not respond to any of the salacious false stories, gossip, misinformation and lies about his personal life. Hopefully, the dissolution of this short marriage will be resolved quickly.”

Throughout the past weeks though Amber Heard and her camp have gone headline crazy with accusations, stories, so called evidence and deranged off the wall accounts of a person that no one would recognize as the Johnny Depp that anyone knows. So the question hangs in the air, why does Johnny and his people continue to let the internet and publications throw around all this dirt and stay quiet? The answer is simple, “Give her enough rope and she’ll hang herself.

The one thing that can be said no matter how much is true on Amber’s fairytale of the past two years is that she reached above her head and climbed up the ladder. An actress who had no great prospects before her film with Johnny, “Rum Diary”. No matter how stunning she may be, Los Angeles is filled with beautiful women who want to be famous. The chance to be the center of THE Johnny Depp’s attention for any amount of time gave her the cracked door that any woman dreams of. This was her chance and she knew it. “With a little bit of faith, trust and pixie dust” she hit the jackpot. Her intentions are hidden to us and so all her forethought planning can’t be known. The only thing we CAN know is that unfortunately for Amber there is a little invention called the internet. The internet, a place where our past can’t be hidden and neither can a person’s life on social media.

So while Johnny goes into his self-healing regrouping with his circle of friends, he leaves Amber and her minions to slowly peel off the layers of her life and her imaginary “nightmare” of being Mrs. Depp. Every day she, her friends and her camp embarrass her more and more all over the public realm. Johnny stays silent while his friends, family and employees speak volumes for him. It may be because she’s new to the public eye and Johnny is a seasoned famous figure who has been known worldwide half his life or she’s just the mentally unstable female. It could be said that inexperience caused a rookie mistake on her part. There have been theories about her stalking Johnny when she was young and even if that isn’t true, one has to wonder if she wasn’t paying attention at all during her time with him. Did she not notice his huge fan base or his lifetime circle of supporters and friends? Was she oblivious to his esteemed reputation? Of course she was, which is why she tried to pull him away from anyone close to him and why she stayed so close to him while he was working. The ingenuity ended there however; Amber must not have thought far enough ahead to realize what she was dealing with throwing out such outlandish allegations. Doctored photos and heat of the moment screaming into a phone doesn’t paint a full picture of a person’s demeanor. The brushstroke of guile doesn’t equal a masterpiece of art. Mid-life crises or not, an infallible point of time unfortunately has befallen this great gift of talent and it will pass. He isn’t scared or stupid; he isn’t depressed or intimidated trust that. Johnny is sagacious and shrewd. He folds his arms quietly and sits back to watch the train wreck. Just like the traffic on the 101, everyone will slow down to gape and stare while at the same time wishing they could just unsee it and look away.

The rope goes thicker and longer and steps can now be heard leading up to the hangman’s noose, not unlike in “Pirates of the Caribbean.” Since this is the REAL world and not the movie set, there will be no dashing pirates launching a last minute escape here for Amber Heard.

All things have an end,

Johnny-Depp.org might have one, too. I just got an email that the host closes doors in just 4 days. Yes, I was as shocked as you. 11 years might be for nothing, and while I’m trying to get at least the domain back, I’m not sure if this might be a sign to stop all this. I’m tired fighting for the domain, a new host, staff members, news, time and even love for all this.

I have no idea yet how it continues, I just got the info myself, and I’m under shock.

but I wanted to share with you to give you the chance to save all the info you want within 4 days.

Feel free to contact me at martina {at} inspirationally {dotty} net

Updated: Here is another article about the visit and a different video.

The Max Ernst Museum Brühl of the LVR shows for the first time in Germany an exhibition of the American film director, producer, artist, photographer and author Tim Burton (Beetlejuice Edward Scissorhands, Alice in Wonderland).