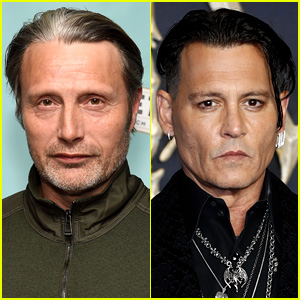 Danish actor Mads Mikkelsen was recently confirmed as the replacement for Johnny Depp‘s character Grindelwald in the upcoming Fantastic Beasts 3 and now he’s opening up about playing the role.

In an interview with AP Entertainment, Mads confirmed that he has not spoken to Johnny about taking the role.

“No, I don’t know him,” he said (via The Independent). “I’ve met him once. I wish I had his phone number, but unfortunately that’s not the case.”

He added, “There’s nothing else I can do, to be honest. The only approach I can have is connect the bridge between what he did and what I’m gonna do and then we’ll see what lands.”

Mads previously discussed the film and said, “Job wise, it’s obviously super interesting and nice. It’s also a shocker that it came after what happened, which is just super sad. I wish both of them the best. These are sad circumstances.”

Find out how much money Johnny is making for Fantastic Beasts 3, even though he only filmed one scene that won’t be used.