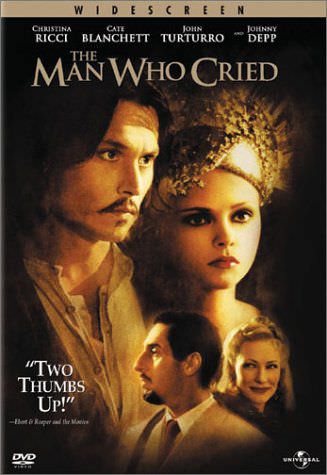 Fegele Abramovich (Christina Ricci), a Russian Jew is separated from her father (Oleg Yankovsky) as a child in 1927. Her father has traveled to America to seek his fortune and plans to send for Fegele and her grandmother. Before leaving, he sings in Yiddish to his daughter Je Crois Entendre Encore from the opera Les pêcheurs de perles by Georges Bizet. This song recurs throughout the movie. After her father leaves, the Jewish village is attacked and burned in a pogrom. Fegele escapes with the help of neighbors but they encounter several obstacles along their route, and she finds herself separated at the docks from the young teenage boys looking after her. Fegele is soon crowded onto a boat headed for Britain, without her compatriots. In her hand she clutches a photo of her father, and in her pocket a coin given to her by her grandmother. These are her sole possessions.

Upon arrival, an English official renames her “Susan” and places her with foster parents. English students at school taunt her by calling her a “gypsy”, but she cannot yet understand English. A teacher at the school overhears her singing Je Crois Entendre Encore in Yiddish, and teaches her to sing and speak in English. As Suzie grows, she is shown singing Purcell’s “Dido’s Lament” for a school assembly in English.

Several years pass and Suzie auditions for a singing dance troupe heading for Paris. In Paris she meets an older Russian dancer, Lola, (Cate Blanchett) and they share an apartment as friends. At a formal party, both women perform as dancers alongside a mysterious performing horseman Cesar (Johnny Depp), a Romani who says little but develops a quick rapport with Suzie. After their performance outside, they overhear a marvelous tenor inside singing Je Crois Entendre Encore alongside the piano. Suzie recognizes the song from her childhood. The voice belongs to Dante (John Turturro), an Italian opera singer who immediately catches Lola’s eye. Lola works her way into his good graces and falls for his charms, enticed by his wealth and success.

Throughout the bulk of the film, Dante, Lola, Suzie, and Cesar all for an opera company directed by Felix Perlman (Harry Dean Stanton). Dante is revealed as an imperious follower of Mussolini: this alienates him from Suzie even as he becomes Lola’s lover. Meanwhile, Suzie is attracted to Cesar, and he introduces her to his “family” (essentially his entire tribe). This intrigue soon turns to love as Suzie spends more time with Cesar and his family.

One day Dante is rifling through Suzie’s things after a dalliance with Lola in the apartment and he discovers the photo of Suzie’s father that she has kept since childhood, and deduces her Jewish heritage. Suzie overhears this exchange and is concerned. An elderly Jewish neighbor downstairs, Madame Goldstein (Miriam Karlin), also knows that Suzie is Jewish and has warned her of the dangers on the horizon as the Nazis invade Poland.

The next year, as the Nazis invade France and approach Paris, an exodus begins of Jews and other people threatened by the Nazis. Madame Goldstein is hastened away in a black car as Suzie watches in shock.

With the Nazi invasion of Paris imminent, the crowds for the operatic show dwindle, and the only cast members left are Dante and Suzie. Dante attempts to seduce Suzie and she rebuffs him. He lashes out at her for her heritage and her relationship with Cesar, whose heritage he also scorns. Felix Perlman, the director of the show, comes to her defense; he reminds Dante that as an Italian in Paris at that time, should Mussolini align with the Nazis, Dante’s own position in Paris would be precarious. He also reminds Dante that he himself is a Jew, and tells him that the show is shut down permanently. Since singing is his life, Dante is shaken to the core by this development and prays in church for the Germans to win so that he may be a famous singer again. The Nazis enter Paris the following morning, and armor and marching is heard in the distance.

Dante reluctantly returns to his earlier role as minstrel, performing in the same opulent music room and singing Je Crois Entendre Encore as he did the first time Suzie and Lola encountered him. After another rebuff from Suzie, Dante reveals to a Nazi officer that Suzie is a Jew. Lola overhears this betrayal and informs Suzie that she is in danger and must leave Paris. Lola has also decided to leave Dante and has purchased tickets for Suzie and herself on an oceanliner headed for America.

The same night of the party, the Nazis attack the Romani village and kill a child. When Cesar comes to her apartment to say goodbye, Suzie expresses her desire to stay and help Cesar fight the Nazis for his family, but he tells her she must flee and find her father. They share a tender last evening together. In the early dawn hours, as Suzie sleeps in his arms, Cesar sobs quietly. Later in the morning he appears to be asleep as Suzie slips out the door silently after leaving him the coin her grandmother had given her. He opens his eyes as she leaves the room, revealing he was awake the entire time.

Suzie and Lola leave on the ship for America, and Suzie sings onstage (Gloomy Sunday) during dinner for the ship’s guests. During this dinner Lola finds a new patron in an elderly gentleman. That night, the ship is attacked and sunk, a frequent occurrence at that time. Lola is killed, but Suzie is rescued from the wreckage by a passing boat and taken to New York City.

Suzie searches for her father and discovers that he changed his name, gave up singing, and moved West after hearing about the attack on his home village back in Russia, which he assumed killed all the members of his family. Suzie goes to Hollywood where her father was a studio head and discovers he has a new family and that he is dying. She goes to the hospital, walks past his new wife and children who are waiting outside the door to his room, and is reunited with her father. He recognizes her and expresses joy at her appearance. She sits on the side of his bed and sings Je Crois Entendre Encore to him in Yiddish as tears roll down her face.