Lori and Johnny were still on good terms and believing in Johnny’s special talent, she introduced him to her friend, Nicholas Cage.

Nicholas was already an actor in his own right having starred in Rumblefish. Nicholas and Johnny hit it off right away and became great friends immediately. Nicholas suggested to Johnny that he try acting. Johnny laughed at first, but realized that acting might be a great way for him to bring in some much needed money and bankroll his music. Johnny went to meet Nicholas’ agent . She loved Johnny as soon as he walked in and much to his surprise she signed him right away even though he had no experience at all. The very first thing that she sent Johnny to do was to go audition for the new Wes Craven film. As soon as Johnny saw the script he was concerned. The part was written for a tall blond haired, football jock. Johnny showed up for the audition in earrings and spiked hair. He himself has stated while chuckling “I showed up for the part looking like a f**king catacomb dweller.” But Johnny had practiced the part and nailed the audition lines. There was no way for him to hide his charisma and charm and he won the director over easily. Craven’s daughter and her friends were at the reading and went absolutely wild over Johnny and his sex appeal. When Wes saw this, he was pushed over the edge and offered Johnny the role. Not expecting much, Johnny was just thrilled to be getting paid at all! No one is totally sure about this fact, but it is known that Johnny was really hard up for money by this time and has even been rumored to have had stolen sandwiches from the 7-11 just to eat. He himself has said that he was “deadass broke.” After playing in bands for over six years and not achieving much financial accomplishment at all, Johnny was not expecting, nor prepared for over night success. Working on the film for six weeks, he received 1,200 to 1,500 a week, which was more money than he had ever seen before. “It was amazing to me that anyone would even want to pay me that much money?”he has said. Johnny was suddenly encouraged and decided to throw himself into this new adventure, reading up on method acting and trying to get a little more serious about the drama roles that he really wanted. Even though the Nightmare on Elm Street was a great success, the other roles came a little harder to Johnny and he took whatever role he could to maintain his only way of earning money. His next role was in a student film (called “Dummies“) directed by Laurie Frank. He was cast opposite a young actress named Sherilyn Fenn and during the only three-day shoot, they got along so well that they started dating and soon fell madly in love. He was twenty-two and she was seventeen and soon began to live together. Different sources give different accounts to this time in Johnny’s life and he does not openly talk about a black and white time line, but around this time his band The Kids broke up. Some say it was a bad break up and quote Johnny saying, “yeah it was bad they still hate me,” but other sources have quoted Johnny saying that he just became to busy in his pursuit of acting in this time and also started playing with the band The Rock Angels.

The Rock Angels were also from Florida and had played on the same circuit as The Kids. They had lost a guitar player and Johnny stepped in his place. Glam rock being the big thing, they played well together and hoped for a bright future in the world of music.

During this era, Depp made two more films that both bombed for different reasons. The first film was Private Resort with Rob Marrow playing Johnny’s best friend. This was your basic eighties teen flick. Containing nothing more than the shallow humor and sexual connotations that were so popular in that day and age. Even though at the time the movie was a total failure, it has become a favorite trivia point among Johnny Depp fans. The next film that Johnny was to work on was a made for cable movie named Slow Burn. This was a mystery in the Hitchcock style of suspense in which Johnny played a millionaires son who is searched out by his father. Very few people have actually seen this film but it has gotten some critics to say many positive things about the young Depp’s ability. Some people say that Johnny deliberately leaves these two movies off his resume, but when asked, he is very open and has said; ” yeah I made some sh*tty movies when I first started out, but I’m not embarrassed by them, especially as I didn’t think that I was going to be an actor – I was just trying to make some money – I was still a musician. I mean I was still trying to just finance my real dreams.” 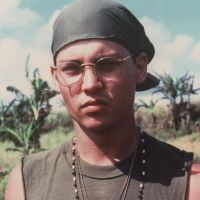 It was soon after this that Jacobs called and asked him to read for a part in the war movie Platoon, written and directed by Oliver Stone. Platoon was the kind of role that Johnny had been looking for. Johnny loved the script and hoped that he would land a role. After he met with Stone, the director liked him so much that he called Jacobs the very same day and offered the part to Johnny. So, Johnny got to take his first big adventure off to the Philippines to start training “boot camp” for the movie. He left Sherilyn behind and missing her so completely he scrawled her name across his helmet. (You can notice this in the movie, if you pay close attention.) The training was intense and for thirteen days, Johnny and the rest of the cast were smack in the middle of the jungle and over 100-degree weather, performing typical army war tactics. Neither he nor any of the others were prepared for the experiences that they would have there. From the typical movie set and boot camp problems to the crew coming down with a sickness, Johnny had a unique ride and view of his first major film. After 54 days in the jungle, filming was complete and Johnny returned home. Platoon would gross about 8.1 million dollars and was the top grossing film of 1987. Stone, with regret, saw Johnny’s role cut more than in half and damaged immensely.

Johnny’s relationship with Fenn became spotted with one night stands and turned into an on and off again stormy romance. Johnny states that even thought he is painted as a wild child, he really still held onto his roots and strong upbringing when it came to relationships. Honesty and openness, which may have brought about some of the problems, were not a problem for him. He has said, ” I think I am a mixture of a romantic and a realist. I am very considerate of other people’s feelings. I believe in the idea of stability and marriage, while at the same time the realistic notion of divorce. I whole-heartedly believe that in a society where people get divorced every five minutes you can still stay married for 50 or 75 years. Its been done and its beautiful.” Even though his heart was in the right place, he shied away from a commitment and went his own way. It was about this time that Johnny, under the recommendation of Nicholas Cage, attended the Loft Studio. Johnny believed that if he was ever going to obtain serious roles, then he should learn more about the craft. He was not there long, because it was then that Jacobs called again with a television offer that would turn the next page in Johnny’s life and career.